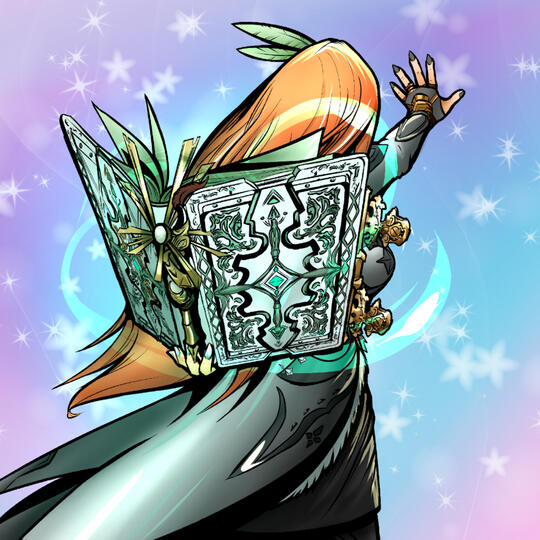 Student of Magic | Lady of Light 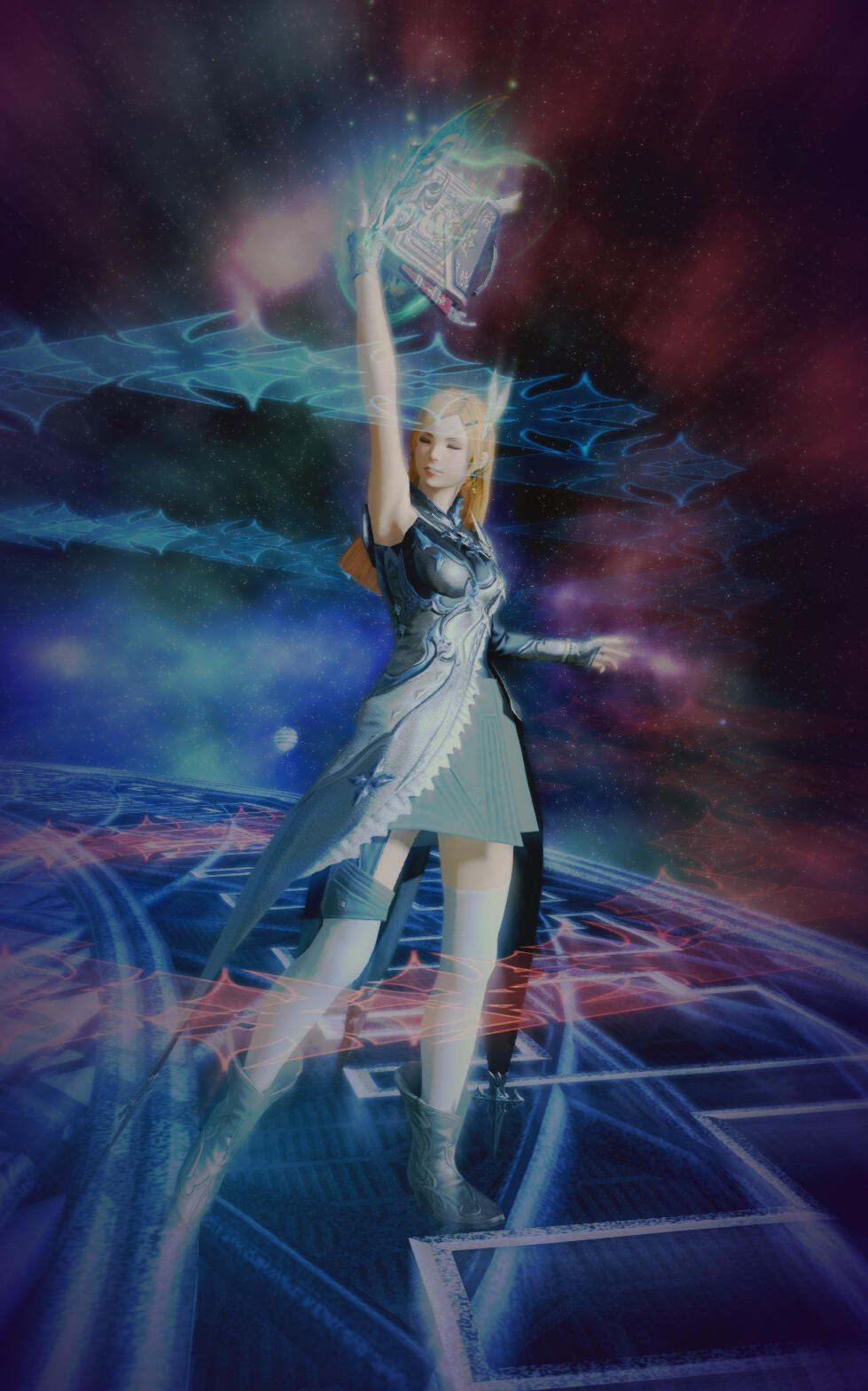 Morgana Lynette Alice Browne is a young woman of Sharlayan descent, born to a teacher and a healer. She spent the first years of her life, living in New Sharlayan, until the Garlean forces pushed the denizens of the settlement to abandon it and return to their motherland.She and her parents settled in a small farming village, not far from the city. Morgana's mother, Lynette, taught the younglings of the village everything she could. Morgana's father, Kayne, on the other hand, would take care of those who were ill with such skill and effectiveness, he earned himself a reputation that would bring those from neighbouring settlements to be treated, and, on occasion, he would be summoned to the city to take care of special cases once in a while.When Morgana reached the age of sixteen, she was fortunate enough to secure herself a place at The Studium, where she went and studied all manner of things, focusing mostly on classes relating to arcanima and astromancy, having had a fondness for both arts since she was young. She would take what extra classes she could and did dip into a few other fields to sate her thirst for knowledge. The more she learned, the more she realised she could not learn everything, but that only made her determined to learn as much as she could. She made a good many friends while there, including a red-haired miqo'te, possessed of two-toned eyes like herself, and a pair of very young elezen, who were exceptionally bright and skilled for their age.Upon returning from the Studium, Morgana took up a post at her father's clinic, and would be left in charge should he have to go to the city. Over her time there, her ability as a healer grew, but some people would often still come to her to have their fortunes read from the deck of sixty. She would also endeavor to aid her mother in the classroom when she was not needed in the clinic. She would do whatever jobs were required of her to keep both her parents sane.Throughtout her time living in the village, she became very close to a young hyur boy called Mordred Ravenholme. The two were close friends and would do everything they could together, including attend the Studium. He taught her some of the more outdoors-y things she has done, including the survival tricks he knew. His father was a travelling merchant and would on occasion take his son with him to all kinds of far-flung places. Mordred was bitten with the desire to see more as a result, and the stories Morgana's parents told her left her wanting to go and explore too. However, Morgana felt it was her duty to work at the clinic and was reluctant to leave that behind.Four and a half years after the Seventh Umbral Calamity, Mordred made up his mind to travel and explore Eorzea, hoping to learn more of the arts of the blade that he had become so enamoured with on his journeys with his father. It was only a few painful months of longing and several nudges from her parents before Morgana packed her bag and set off after him, determined to have her own stories to tell him when she found him. And thus, about five years after she awoke to see the destruction wrought by Bahamut, did she catch a boat and head to Limsa Lominsa to see it for herself.

Precious little of a past life is known. It is knowledge she keeps close to her chest, but had relied on in recent times of need.
Do not read if you have not completed Shadowbringers 5.3!

Azem was her title. Soteria was her name.Her soul was bright, always glistening, shifting between hues of pink and blue. Hades and Hythlodaeus would often liken it to an opal or mother-of-pearl. Her eyes matched her soul and seemed to also shift too.Never heavily gifted in any one art or field of study, it was her ability to know who to reach to in times of need that helped her earn the seat that she was so proud to hold. 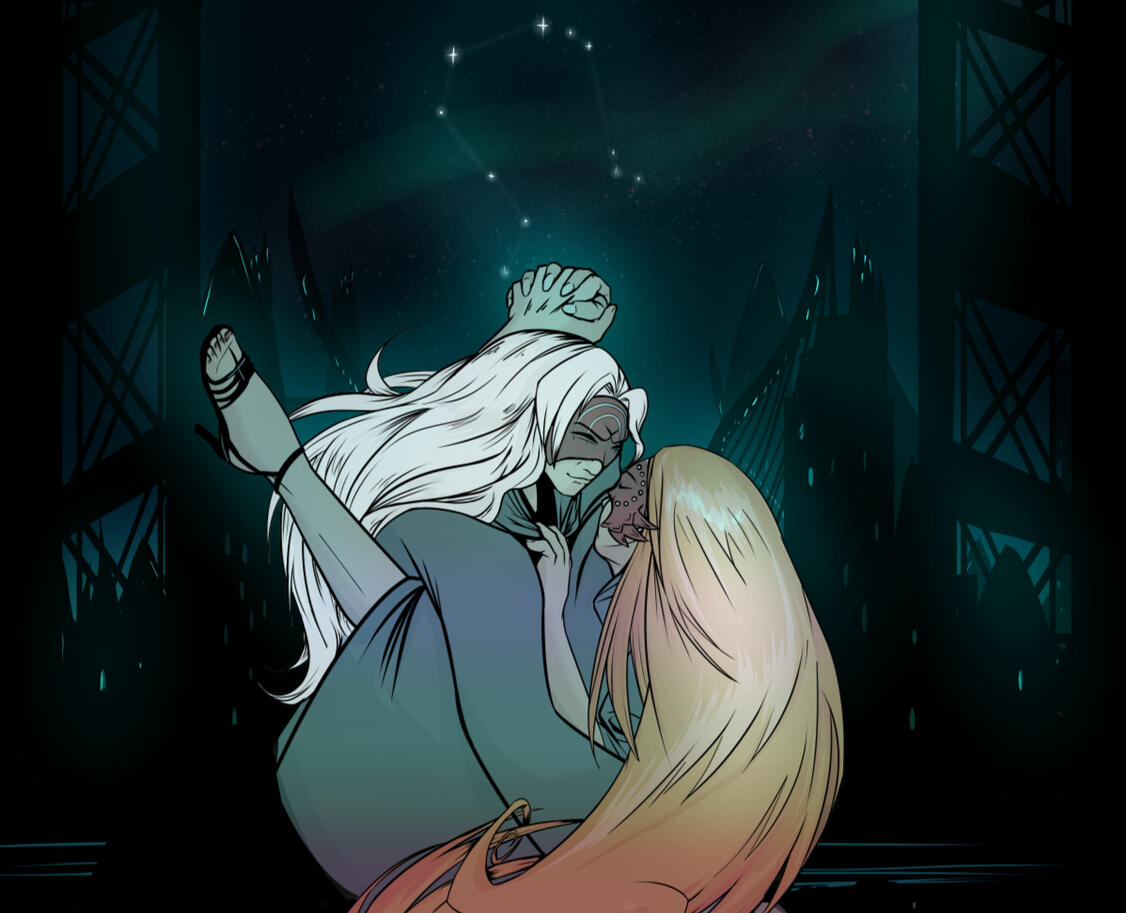 Silver Valkyrie Events is a community for roleplayers based on Light datacentre. Originally started on Lich as a community independent from a free company, one was created in its name on 17th September 2017, and the estate in Ward 9 of Mist was acquired shortly afterwards. Since then, it has grown into a very happy family of roleplayers and non-roleplayers alike.The staff of the discord community work hard to provide much for the members. Over the years we have gathered and created many resources for roleplaying, and have had many knowledgeable people come into our midst, all happy and willing to share what they have learned over the years. It is home to The Crystal Crown Cafe; a maid and butler cafe for the denizens of Hydaelyn, as well as a wealth of many other creative venues.If somewhere like this sounds like an interesting place to you, be sure to check out how we think about roleplay and see if it gels with you. As has always been the mentality, you do not have to be a member of our free company in order to get involved with the fun we have. 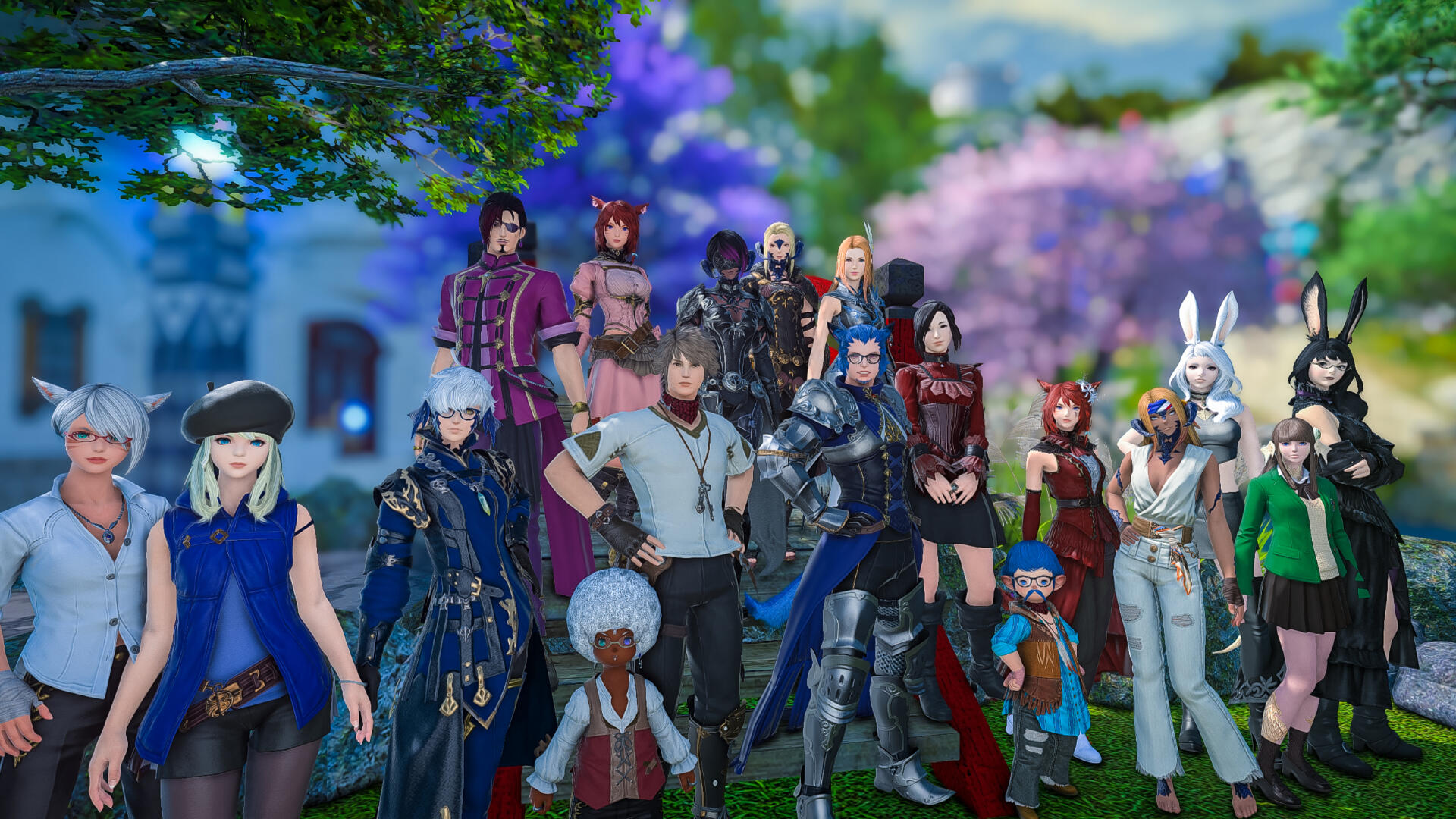 Tales of the Dragonsong War

The Road to Revolutions

Below can be found information on other characters I am known to play, most of which are related to Morgana. Please let me know if you wish to plot with them for any reason, though please note that most do not exist as in game characters.

Manah IthelinManah is the daughter of well-travelled adventurer Mis'to Raesthe and Ithilen clanswoman Rhela. The youngest of five, Manah has always been the curious one. Her four siblings, oldest to youngest, are Ahmi, Rhela'a, Eveh and Jovah. She waited for her mother's trips to Gridania with bated breath. She was fortunate enough to learn to read while she was there, and took great pleasure in doing so.Keen to explore, read and climb up things, Manah considers herself very lucky to have found her way to Her Embrace. Now staying there under the care of her father, Mis'to, Manah very much enjoys learning all she can from those who frequent the house. She is still very much trying to find her way in the world, and has little intention of settling to form a family any time soon. 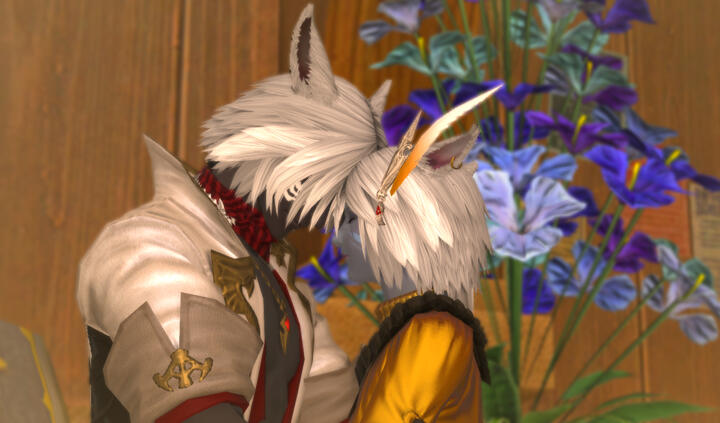 Lucy BurneGridanian born and raised, Lucy works as the receptionist and is ready and willing to help those in need. Possessed of somewhat of a fiery temper, she is quick to get things under control should patrons start bickering. She is trained in basic first aid and healing magic, but is ready to call Morgana should there be a major incident.

Philippe RoulemetA gentleman of Ishgardan decent, Phillipe has always had a love for cooking, and aims to learn and practice as much as he can in the kitchens of Her Embrace. He has a certain fondness of children and enjoys passing on his skills whenever given the chance.

Kaede TsuwamonoOriginally form Sui-no-Sato, Kaede has always had a fondness for plant, regardless of whether they are from above or below the wave. Though many tried to discourage her from it, she had been ever curious of the world above the waves. When a chance came, she was determined not to let it go, and found herself sailing all the way to Vylbrand. Lacking the further funds needed to get to mainland Aldenard, she used the last of her money to purchase tools and worked completing gathering levequests for the adventurers guild. She continued to do this until an advertisement for a gardening apprentice came up at Her Embrace. Kaede took to her new role like a natural and is always excited when new and interesting plants are bought her way.

Fraegeim ZwynsyngwynKind and knowledgeable, Fraegeim has done her fair share of travelling over the years which have taken her to many far-flung corners of the star, including Thavanar, Hingashi and Sharlayan. The one thing she found a love for while travelling was conversation and the different kinds of drinks that people would share. She arrived back in Limsa Lominsa not long after the Seventh Umbral Calamity. Having witnessed the horrors from the sea, she felt it only right that she work to bring comfort to those who needed it. Knowing that most tend to turn to drink in their most dire times, she sought to become a bartender, that she may listen to the woes of those who came to sit in her company. One night, she was graced with the company of one of the members of Word of Love, who told her of their company. She made a point of getting a job with them the moment a vacancy was open. One of those who did not wish to leave for Hingashi, she stayed with the Valkyries and continues tending the bar to this day. 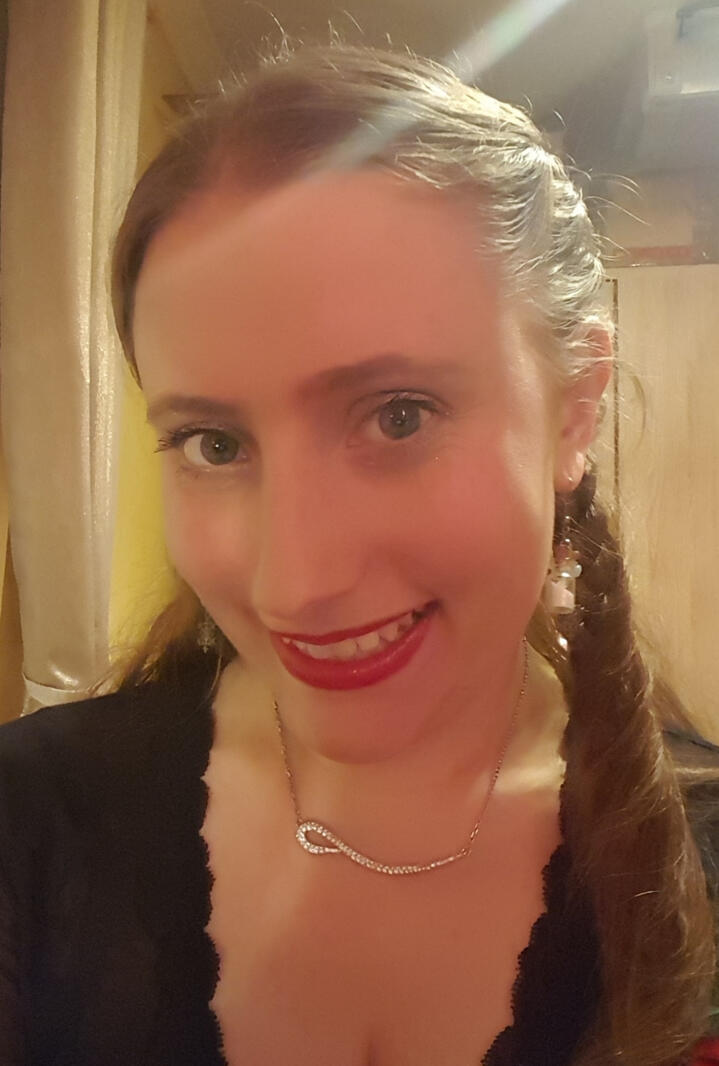 Nickname: Mitsuki
Age: Early thirties
Location: UKHey! I figured that it was worth adding a little bit extra about me and what I do OOC.I've played FFXIV since February 2016 and have been running my own free company, Silver Valkyrie, since September 2017. The organisation, which existed prior to the FC, is based on Lich and focuses on running events and encouraging roleplay on Light data centre. The community was featured in volume 22 of GPOSER magazine.I am also the curator of The Submarine Information Thread on the FFXIV official forums. Streaming is something that has recently started enjoying. I am working towards several achievements, including completing 2000 mentor roulettes for Astrope.Outside of FFXIV, I enjoy tabletop gaming and roleplay, writing and making jewellery - check out @MitsukiMakes for more information.